Using Monolix interface, it is possible to export your data set, your model, your project to other Lixoft software.

Datxplore is a graphical and interactive software for the exploration and visualization of data. Datxplore provides various plots and graphics (box plots, histograms, survival curves…) to study the statistical properties of discrete and continuous data, and to analyze the behavior depending on covariates, individuals, etc. It is a great application to have a better look to your data set.

In Monolix, you can export your data set by clicking on the Datxplore icon in the Data and model frame as on the following figure. Datxplore will be directly launched with the defined data set.

Notice that, due to limitation in Datxplore, it is not possible to export data sets with IOV, or washout with an EVID=4.

Mlxplore is an application for the visual and interactive exploration of your models. It is designed for intuitive and easy use. It is a powerful solution in your daily modeling work as well as for sharing and teaching of PK/PD principles or for real time dose-regimen exploration in front of an audience. Mlxplore also allows you to visualize the statistical components of the model, such as the impact of covariates and inter-individual variability.

After clicking on OK, Mlxplore launches. Thus, you will be able to explore your model and associate it to the data set.

Notice that some cases are not managed by Mlxplore:

Another important point is that Mlxplore is only managing predictions. Thus, even if a continuous error model is considered in the project, it will not be taken into account and the associated sliders have no impact on the results.

Moreover, when categorical covariate are considered, the following message appears in the export window 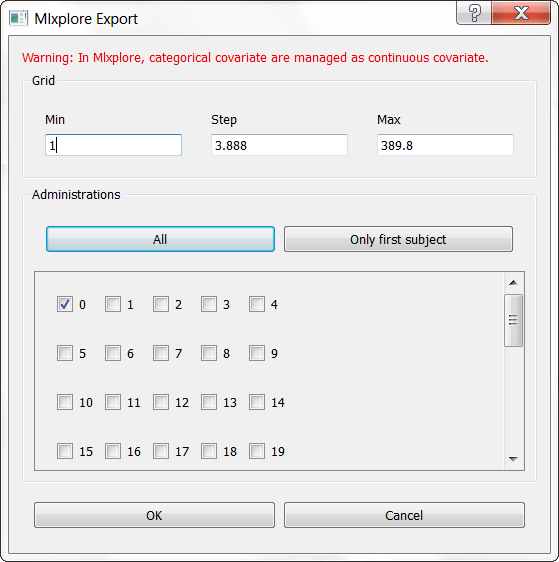 This implies that the categorical covariates are not anymore considered as a category but as a continuous covariate with 0 for the reference category.

Simulx is a powerful and flexible simulator for clinical trial pharmacometrics that runs on top of the Lixoft simulation engine. It covers a comprehensive range of data types for simulation and links to a ready to use PK and PD library. It directly connects with Monolix for seamless Modeling and Simulation, and is the statistically most rigorous solution available today. Simulx is currently available via a comprehensive R package thanks to its combination with mlxR, a DDMoRe-sponsored library developed by Inria which contains several R functions for advanced clinical trial simulation.