Objectives: learn how to implement a model for categorical data, assuming either independence or a Markovian dependence between observations.

as a sequence of conditionally independent random variables, the model is completely defined by the probability mass functions

probabilities is 1, so in fact only

of them need to be defined. In the most general way possible, any model can be considered so long as it defines a probability distribution, i.e., for each

. Ordinal data further assume that the categories are ordered, i.e., there exists an order

We can think, for instance, of levels of pain (low

severe) or scores on a discrete scale, e.g., from 1 to 10. Instead of defining the probabilities of each category, it may be convenient to define the cumulative probabilities

, or in the other direction:

. Any model is possible as long as it defines a probability distribution, i.e., it satisfies

forms a Markov chain. For instance, a Markov chain with memory 1 assumes that all that is required from the past to determine the distribution of

is the value of the previous observation 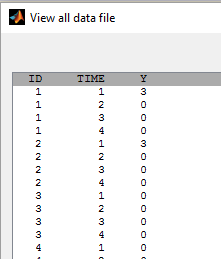 This model is implemented in categorical1_model.txt:

A normal distribution is used for

, while log-normal distributions for 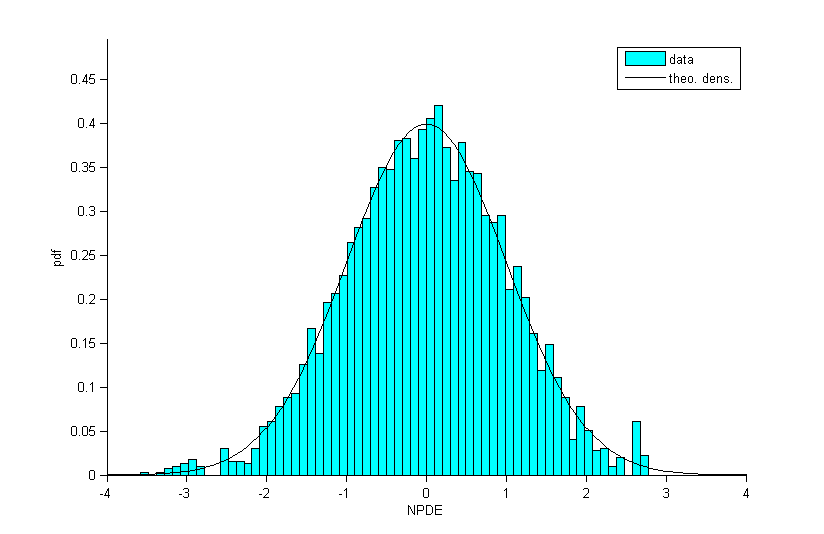 VPC’s for categorical data compare the observed and predicted frequencies of each category over time: 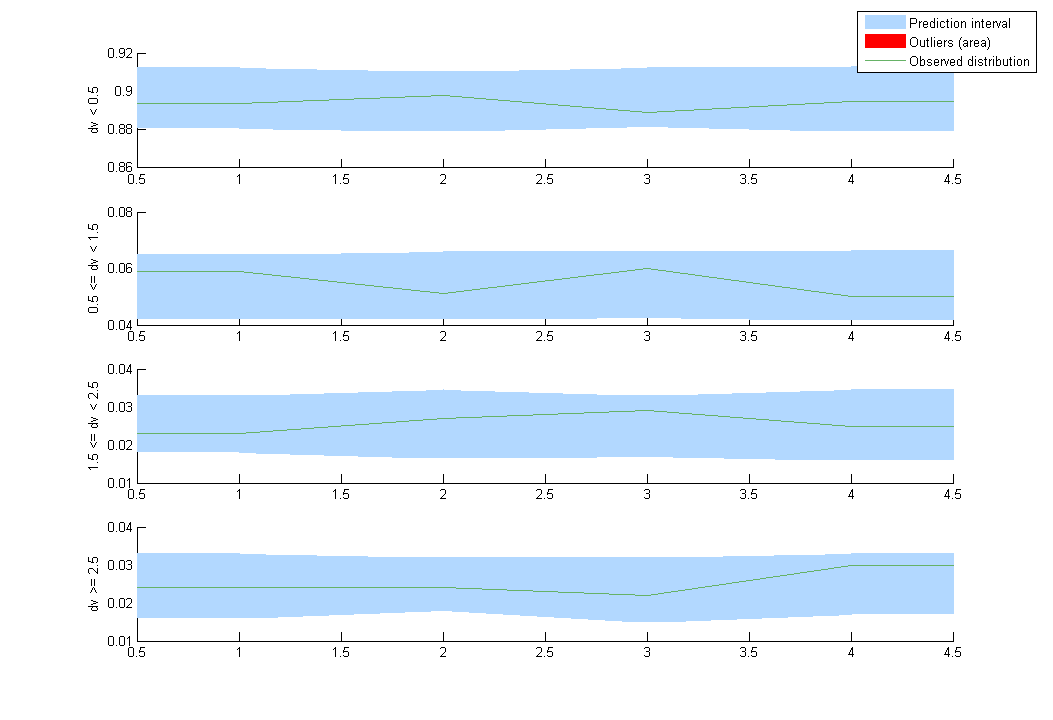 The prediction distribution can also be computed by Monte-Carlo: 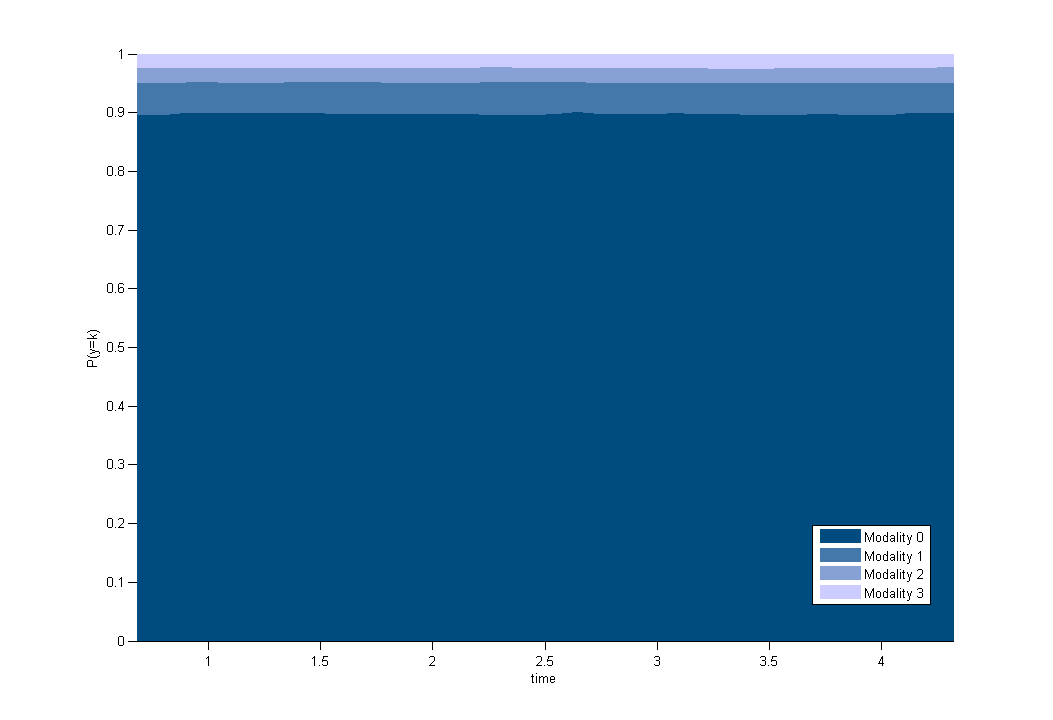 A proportional odds model is used in this example, where PERIOD and DOSE are used as regression variables (i.e. time-varying covariates)

to be a discrete-time Markov chain.

In this project, states are assumed to be independent and identically distributed:

Observations in markov1a_data.txt take their values in {1, 2}. Before fitting any model to this data, it is possible to display the empirical transitions between states by selecting Transition probabilities in the list of selected plots. 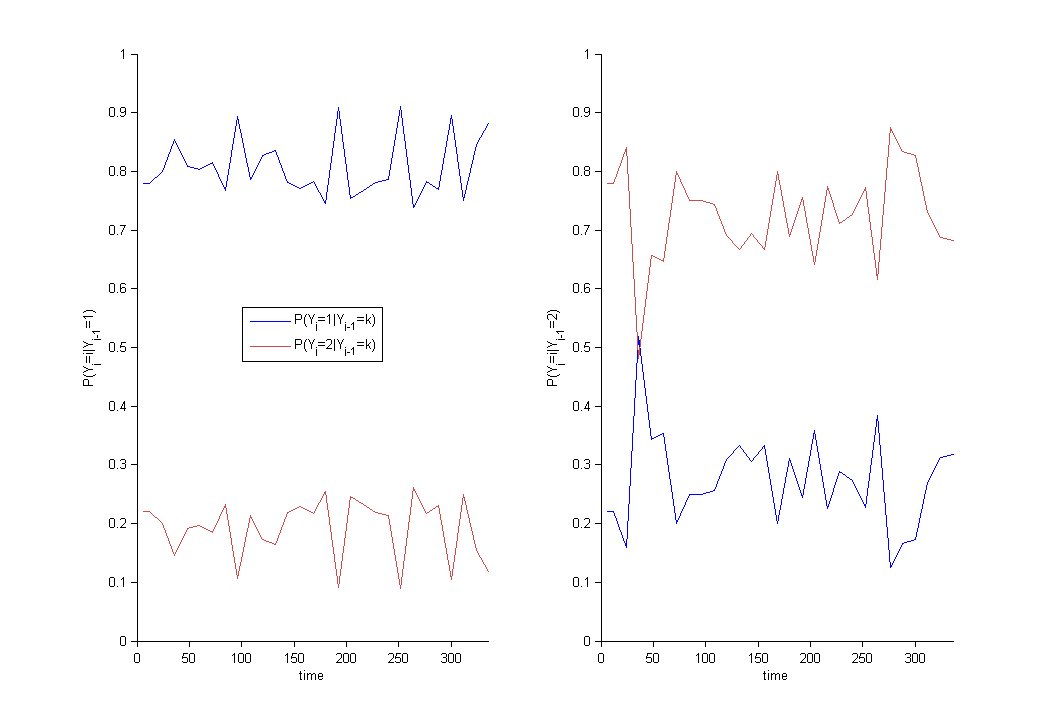 We can see that the probability to be in state 1 or 2 clearly depends on the previous state. The proposed model should therefore be discarted.

The distribution of the initial state is not defined in the model, which means that, by default,

The distribution of the initial state,

, is estimated in this example

Transition probabilities change with time in this example: 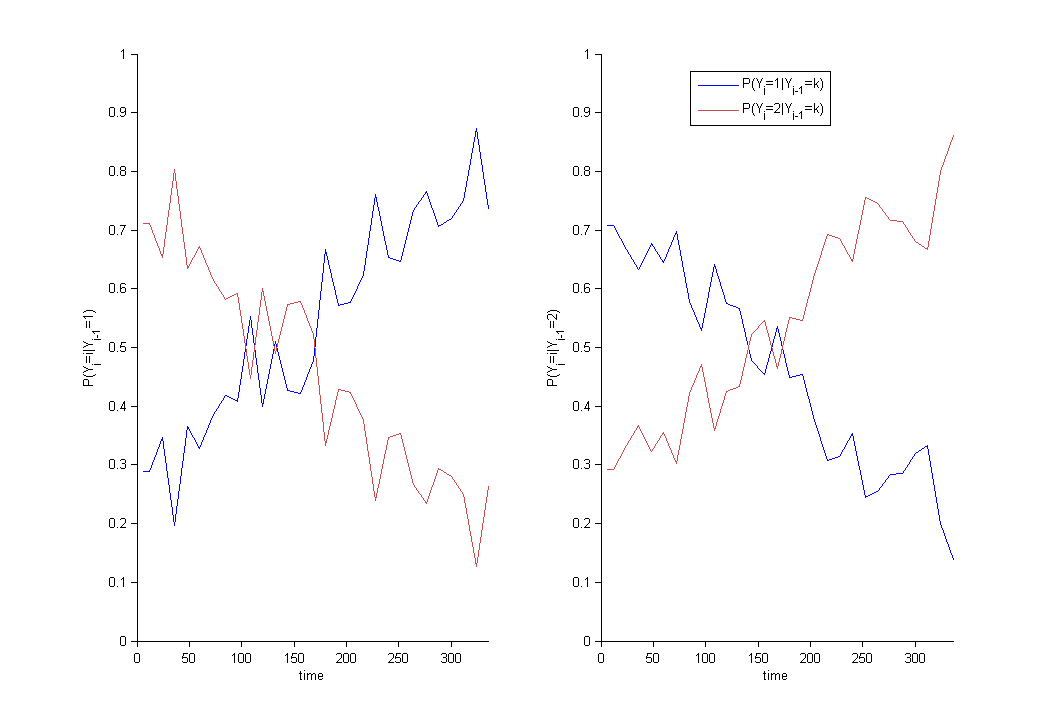 We then define time varying transition probabilities in the model:

Observations in markov2_data.txt take their values in {1, 2, 3}. Then, 6 transition probabilities need to be defined in the model.

The previous situation can be extended to the case where time intervals between observations are irregular by modeling the sequence of states as a continuous-time Markov process. The difference is that rather than transitioning to a new (possibly the same) state at each time step, the system remains in the current state for some random amount of time before transitioning. This process is now characterized by transition rates instead of transition probabilities:

The probability that no transition happens between

Furthermore, for any individual

that satisfy this condition.

Observation times are irregular in this example: 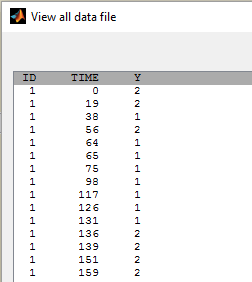 Then, a continuous time Markov chain should be used in order to take into account the Markovian dependence of the data:

Time varying transition rates are used in this example.